If you have ever wanted to be kicked in the teeth and laugh while it happens, you’ve come to the right place.

Jonathan Acuff is Prodigal John on Twitter, and if you’re one of the four people in the world not following him, you’re missing out. His 140-character tweets are worth signing up for Twitter, even if you never follow anyone else. Then go to Stuff Christians Like and check out the blog that started it all.

But about the book… 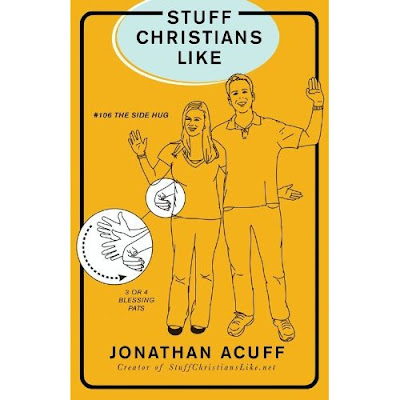 Oh, it’s awesome alright. Awesome in a way that makes the Holy Spirit slap you upside the head. I thought I knew what SCL was all about from reading the blog, but there’s something about having these ideas concentrated in one place that changed the way I think in a way the blog never did. Maybe because I read the SCL blog in a drive-by fashion and the book at a slower pace. Or maybe God just thought I was ready for what Jon might call a “truth smack-down.” I dare you to read about “the splinter in my eye, plank upside yo’ head” gossip plank idea without laughing so hard you wake your dog up from three rooms away. But after you laugh, you’re going to stop and you’re going to think. “Wait a sec… I do that.”

Then two things are going to happen. First, you’re going to feel some conviction. We’re all hypocrites in some area or another. Jon’s observations have cracked me up on more than one occasion, then the Holy Spirit has used that to bring me to my knees. (More on that in Monday’s post.) I’ve laughed ’til I cried, true, but I’ve also done more repenting reading this book than I have after every sermon in my whole life, I think. Second, you’re going to realize you’re not the only one. I have beat myself up over my quiet time lately, thinking I’m the worst quiet time Christian ever. And then I read Jon’s awesome quiet time essay. Oh yeah, I laughed, but I also gave a big sigh of relief. I’m not alone in my struggles.

Seriously, go buy this book. Today. It’s not what I expected it to be. It’s a million and one times better.