Today I’d like to introduce you to Jennifer AlLee, author of The Pastor’s Wife, which received four stars from Romantic Times. 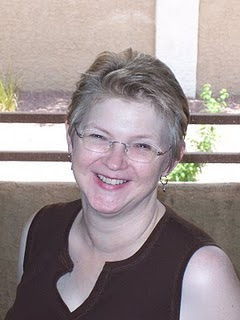 As a child, Jennifer AlLee lived above a mortuary in the heart of Hollywood, California, which may explain her unique outlook on life. Her publishing credits include The Love of His Brother, a contemporary romance from Five Star Publishing (November 2007) as well as skits, activity pages, and over one hundred contributions to Concordia Publishing House’s popular My Devotions series. Her latest novel, The Pastor’s Wife, released February 1, 2010 from Abingdon Press. She’s an active member of American Christian Fiction Writers and serves as the Nevada Area Coordinator. Jennifer resides in the grace-filled city of Las Vegas, Nevada with her husband and teenage son. Visit her website, JenniferAlLee.com.

A few questions with Jennifer:

Q: You have a unique last name. Why is it spelled with a capital letter in the middle?
A: AlLee is my married name, so it’s really all my husband’s fault. The origin is French, and it’s morphed quite a bit over the years. Part of the family spells it like I do. Another part uses two lowercase “el”s. And a third rebel faction spells it with the capital “el” and an accent mark. I know it can be quite confusing. But it sure looks nice on a book cover when they get it right!

Q: You grew up in Hollywood. How did that happen?
A: My grandparents met on the vaudeville circuit. Grandma was a dancer and my grandfather was a concert violinist from Hungary: Duci deKerekjarto (how’s that for a last name?) Duci immigrated to make his mark in Hollywood, which is how our family ended up there. He remained friends with another Hungarian performer, a Shakespearean actor named Bela Lugosi. (Yes, the original Dracula.) Bela died before I was born, but my mom remembers sitting on his lap and calling him Uncle Bela.

My own minor brush with fame came on the day I was born. Michael Landon Jr. and I were in the same hospital nursery in neighboring basinets. My Aunt Karen nearly passed out when she realized proud father Michael Sr. was standing at the window next to her!

Maura Sullivan thought she knew what she was getting into when she married soon-to-be pastor Nick Shepherd. But when she realized the ‘other woman’ in her marriage was her husband’s congregation, she ran. Six years later, she finds herself back in the small community of Granger, Ohio for the reading of a curious will that names both her and Nick as beneficiaries. Now Maura must face the husband –and the congregation – she left behind.

You can read the first three chapters of The Pastor’s Wife right here! Simply click on the cover above.

Want to know more about Jennifer and The Pastor’s Wife? Head over to Amber Stockton’s blog tomorrow!