Today I’d like to introduce you to author K.M. Weiland and give you the chance to read the first couple of pages of her new book, Behold the Dawn. 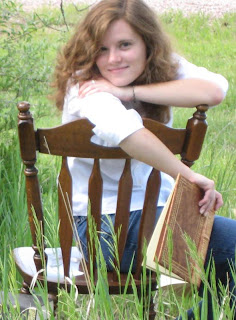 K.M. Weiland writes historical and speculative fiction from her home in the sandhills of western Nebraska. She is the author of A Man Called Outlaw and the recently released Behold the Dawn. She blogs at Wordplay: Helping Writers Become Authors.

Marcus Annan, a tourneyer famed for his prowess on the battlefield, thought he could keep the secrets of his past buried forever. But when a mysterious crippled monk demands Annan help him find justice for the transgressions of sixteen years ago, Annan is forced to leave the tourneys and join the Third Crusade.

Wounded in battle and hunted by enemies on every side, he rescues an English noblewoman from an infidel prison camp and flees to Constantinople. But, try as he might, he cannot elude the past. Amidst the pain and grief of a war he doesn’t even believe in, he is forced at last to face long-hidden secrets and sins and to bare his soul to the mercy of a God he thought he had abandoned years ago.

The sins of a bishop.
The vengeance of a monk.
The secrets of a knight. 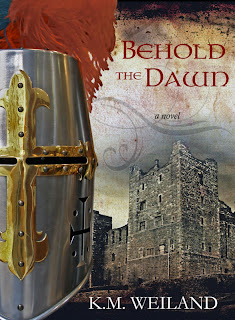 An Excerpt from Behold the Dawn:

All day she had stood near the boundary of the prisoner camp, watching the dust of the distant battle beneath Acre’s walls, listening to the muted cries of the combatants.

But now it was growing too dark to see, and as Lady Mairead drifted back toward the tent that had been set apart for her husband, William of Keaton, she watched the Mohammedans usher their latest prisoners through the cordon of guards.

They had brought back only a few today. In the long, sultry weeks since the capture of Lord William’s ship by the infidel blockade, Mairead had watched countless prisoners dragged or shoved into the camp. Thousands of people were confined here already: men, women, and children—mostly Frankish Syrians, the European natives of Jerusalem. By the count of one of Lord William’s servants, Saladin had 2,500 prisoners in this camp alone.

Holding the folds of her shawl to her breast with one hand, she crossed the dust of the camp to where the Moslems had dumped their score of prisoners in the midst of the growing crowd.

A Frank stepped aside and allowed her to stand at his shoulder. “If that is the extent of their prisoners, God be praised. The Christians will take Acre.”

“It is already taken,” said another. “You can hear that the battle is over.”

She scanned the bloodied faces. Most were French, most were wounded. The Turks threw the last of them into the group, then shouldered their way back through the crowd, shouting to one another in their own tongue. Immediately, the prisoners began their call for water.

Mairead sighed. It was always thus.

Pulling her linen shawl free, she went forward to bind the arm of a man—an archer by his livery—who held his hand to a shoulder wound. His arm was red down to his fingertips, and he swayed where he stood. His face had the blanched look of one who was slowly bleeding to death.

He stared ahead, unseeing, as she knotted the shawl over the wound. “God be with you.” She placed a hand on his grimy cheek, then moved aside to allow a Knight Hospitaler to take over.

She stood still, one hand trying to hold her long dark hair from her face, watching as the prisoners ministered to the wounded among the new captives. So many wounded, so many dying. The priests decreed that a Crusader’s death was only the unhindered passage of a redeemed soul into blessed Paradise and should be cause for rejoicing. But all she could see were the falling tears of faraway loved ones and the contorting pains of those who had not yet made it quite across Death’s threshold.

She did not often come to this part of the camp. Lord William, grievously wounded during their capture, preferred her to remain with him, sequestered from the heat and the throngs of strangers. Whenever the infidels brought forth their prisoners, she always watched from afar as other women tended their wounds.

But she had ached to be here, to staunch the endless flow of blood, to hold in her lap the head of a soldier whose wounds she might heal, unlike those of Lord William, who the monks whispered would never recover.

She drew in a deep breath, biting her lip to forestall the tears, and turned away. She had come to the Holy Land to escape her fears. But she should have known better. They had followed her here. They would always follow her.

She started forward, but trudged only a few paces before the sight of another knight arrested her. He lay on his back in the trampled sand, while two brethren of the Hospital struggled to remove his blood-crusted armor.

He was a giant of a man, easily head and shoulders above most in the camp, and the breadth and depth of his chest and arms bespoke a terrible strength. He had a strong, square chin, barely cleft, and a set to his mouth, even in sleep, that revealed an iron will. A white scar rived his right cheekbone and disappeared into the fair hair above his ear.

The blood-blackened hole in the mail above his left breast showed what it had taken to bring him down. The bodkin that had inflicted the wound was gone, pulled from his flesh by his Moslem captor or perhaps by his own hand. His face was pale, his breathing shallow, his body still.

She drew nearer and stopped at his feet. “He lives?”

The Knights Hospitalers turned to look at her. The one on the left inclined his head. “He lives, Lady.” His accent was unfamiliar, possibly from the southern regions of France.

The other, undoubtedly English, laid a knife to the knight’s tunic and slit it up the middle. “For now, he lives. He’s lost much blood.”

“That is why he sleeps?”

“I know not. His surcoat bears no symbol, not even a cross.”

She watched their ministrations in silence, feeling once more the bitter cold of anguish rise in the pit of her stomach. They
tended so many! Why could they not save Lord William?

As the moon rose full and bright against the murky sky, she knelt and reached out her arms to the Hospitalers. “Please—let me help.”