I’m sure most of you have at least heard about the Station Fire burning near Los Angeles over the past few weeks. MSN had a Reuters shot of it on their Week in Pictures page last week, and it actually stopped me cold for a minute. It made me think of this:

Mark 9:43 (AMP)–And if your hand puts a stumbling block before you and causes you to sin, cut it off! It is more profitable and wholesome for you to go into life [that is really worthwhile] maimed than with two hands to go to hell (Gehenna), into the fire that cannot be put out.

Matthew 10:28 (AMP)–And do not be afraid of those who kill the body but cannot kill the soul; but rather be afraid of Him who can destroy both soul and body in hell (Gehenna).

The Valley of Hinnom (also referred to as Gehenna) was one awful place in biblical times. In the Old Testament, it is where children were sacrificed to Molech (II Chronicles 28:3). By New Testament times, it had become the giant trash incinerator for Jerusalem. And they didn’t just throw garbage out there, either. Dead animals and criminals were pitched into the fire that burned constantly in the valley. The place was so horrible that hell itself was referred to as Gehenna (see the references above). It was so bad that Christians weren’t the only ones using it to refer to hell. The Qur’an names hell Jahannam, which is closely related to the Hebrew Gehinnom.

What does that have to do with the Station Fire? You have to wonder if Gehenna looked anything like this (you can click on it to get a larger view): 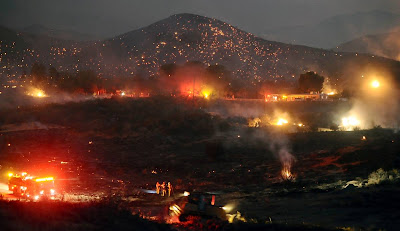