So, yesterday I went to look up something on RCR’s website while I was doing revision, and I came across this. Near the top in the center, white shirt, is me. That was a great ending to my workday, finding that.

Post driver introductions, Casey was whisked away in a Corvette convertible for his parade lap, circling the track to wave to the fans. Tim and I walked back to the car on pit road to wait for him. (I have to tell you the funny part here. I saw a million and one cool things on Sunday. And the only thing my six-year-old daughter cared about was the fact that Casey Mears was lined up right behind Dale Earnhardt, Jr. on pit road. All she wanted to know was if I took a picture of Junior. For some reason we can’t break her of, she calls him Junior Busch. If you’re a race fan, you know that’s, uhm… BAD.) 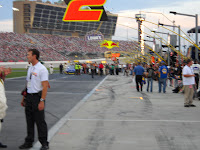 And the waiting began. We stood by the car and waited for other drivers to be introduced and to take their parade laps and for whatever else was happening up on the stage to wrap up. We had no idea what was going on because we couldn’t hear a thing except the crowd cheering (or booing) since the stage faced away from us and so did the speakers.

The cool thing was the chaplain from MRO who came down the line and prayed with some of the drivers and their families, including Casey Mears and his very sweet fiance. I liked that a lot. James Dobson did the main invocation (which, again, we could only catch snatches of. I had to come home and watch it on the DVR to hear what he said. Pretty cool that it was James Dobson, though!) and Diamond Rio sang the National Anthem while we all stood line up on pit road, hands over our hearts.

And, then… we hustled out of there. It was time for the drivers to buckle in and, as Tim said, his job with Casey was done at that point. Hands off.

As we walked back to the pit box, I learned something interesting about walking in Sam’s shoes. They get sticky. Very sticky. Tim warned me, then pointed to a crewmember who was spraying the asphalt with something. Pure Coca-Cola syrup. Yep, as in the soft drink. It makes the pit stall sticky so the guys don’t fall when they go over the wall. Out of all of the “trivia” I learned on Sunday, that might have been the neatest little tidbit. It hasn’t found it’s way into the book yet, but I sure wish I could find a place for it.

The drivers got the command to start engines and it was way cool to hear them all roar to life from that close. And then they pulled out onto the track and that was even cooler. And then they took the green flag and hit full throttle and thatwas the coolest of all! The ground under my feet shook every time the pack sped by. If I tried to drink water out of my water bottle, it vibrated against my lips. Sweet.

Here’s the thing about the real-life Tim’s job and the fictional Samantha’s job: if you want to watch a race, don’t be on the team. You can only see about twenty feet of the track in front of you, the bankings in the turns, and part of the backstretch behind you. And the cars go by so fast you can’t even tell who they are unless you pop your eyeballs out of your sockets trying to watch them. I actually got a chuckle out of standing in the pits, watching the pit crews watch the race on TV as the cars blew by just about a hundred yards or so from us.

I kept my eye on Tim. His job boiled down to listening to transmissions between Casey and Todd (the crew chief), watching Casey’s placement on the board, and generally keeping an eye on what was going on in the pits. Anything of interest, he jotted down in a personal notebook or on a media sheet, then passed the media sheet off to the pit reporters for use during broadcasts. I got video of him talking to some of the media (can’t remember if it was MRN or PRN) during one of the pit stops:

That’s what Sam would look like. I have to tell you that’s kind of exciting, to see up close exactly what your character would be doing.

And the race fan in me loved the pit stops! These guys move in choreography. After two pit stops, I knew right where to stand to be out of the way, because they never went anywhere different; they did the exact same things each time. That was cool, like a weird kind of ballet. 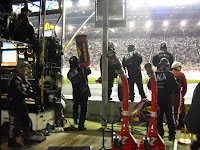 Getting to see pit road up close and to follow a real-life Sam around has to rank up there as one of the coolest things I’ve ever done. I owe a lot of thanks to Tim and Casey and the others who let me tag along and who answered my questions.

God is pretty awesome to give me a gift like that. Like I said, when I started, my prayer was that He’d provide someone to answer my questions. Who’d have thought He’d do it in such an awesome way?