I have to tell you something about my prayer life. It’s a confession of sorts. I am not very good at praying for myself, at asking for great big things from God. There is this rare ability about me to rationalize myself right out of big prayers. Sometimes I forget that God just wants to bless us. Well, last year, I prayed big. And God answered even BIGGER than I prayed. All I wanted was someone to answer a few questions.

For the first part of this story and how I got to be where I got to be, you can click here.

Sunday, I found myself standing outside of Gate 1 at Atlanta Motor Speedway waiting for an incredibly gracious man named Tim. He’s the communications manager for Casey Mears, who drives for Richard Childress Racing. In other words… he does the same job as my character Samantha. And he was kind enough to let me follow him around for his workday during the Atlanta race. I owe him my undying gratitude. Got no problem telling y’all that. Here I was worried about being in the way, and he made me feel like part of the team. In fact, everyone I met (and I met a lot of RCR people) made me feel like I’d been there all along. It was awesome.

I’m a visual learner. For a year, I’ve been corresponding by email with David, who has been wonderful and patient about answering my questions. He couldn’t be in Atlanta, so he arranged for Tim to help me out. Visual me grew leaps and bounds in knowledge on Sunday. Everything that David had written to me suddenly came to life. I could see it and hear it and experience it. I walked in Sam’s shoes.

Not sure how much I want to say here, because I want you to (eventually) buy the book to really get into Sam’s job. But an outline of what I got to do would give a good picture.

The first stop of the day was the RCR media coach. Only about four teams have one, so Sam probably won’t get that luxury since she’s only with a two-car team. It was a nice setup for the PR people though, and I’m sure Sam would be jealous. Tim sat and answered a ton of questions for me about stuff I needed clarifying. Then we went to the garage area to see the 07 getting prepped for the race and to check out the hauler. I got to meet the engineers who work to make the car go, which was awesome. Honestly, you would not believe how many people it takes to keep a Sprint Cup team running smoothly! I was amazed! 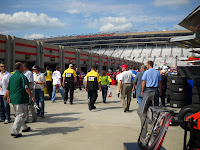 Slid my feet into Sam’s shoes when we left the hauler and went to pick up Casey for an autograph signing. Yes! Now I know firsthand what Sam should be doing while Ryan is busy signing away. I kept an eye on the proceedings, then wandered around in the crowd, people watched, and got some great comments. I’m going to tell you what… when it comes to NASCAR fans, it takes all kinds. When I got back to the golf cart, I was able to talk with Donald, Casey’s motor coach driver. A very sweet man who looks out for Casey. You can tell he’s a great friend to have around.

It was back to the hauler after that so that Casey and Tim could go to the required drivers’ meeting. I wasn’t credentialed for that, so I stayed in the media hauler. That was a God thing. There was a great conversation with the head of business development, Rick, who gave me some whole other angles for the story (and talked church with me). Also got to meet Jeff Burton’s PR lady, Christine. Sometimes there are busy sponsor appearance days and sometimes there aren’t. Casey’s was slow on Sunday and Jeff’s was packed, so Christine gave me some insight into how crazy it can be to run and run before the race even starts. I couldn’t even begin to tell you everyone I met while I was hanging out and how grateful I am to them all.

They had Publix lunch meat in the fridge, so I ate a sandwich and then followed Tim back to the hauler to pick up his radio and get ready for driver introductions.

On the way, I got my first step into Sam’s race-time world. We stopped off at the pit box. I got to climb up top where the crew chief and engineers sit during the race. Sadly, that’s not Sam’s domain, but very cool nonetheless. Back on the ground, Tim showed me where he posts himself during the race and gave me a quick rundown of what he does. Like I said, reading it and seeing it are two different things. Sam came to life for me! 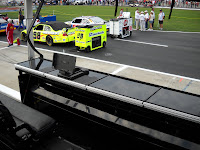 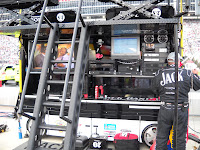 And then we crossed pit road to the grass and it was time for driver introductions. Tim went to get Casey and walked with him up to the stage, sort of being a buffer between the driver and anyone who might keep him from getting where he needed to be. (Missing driver intros is a no-no.) And that, my friends, is where the NASCAR fan in me wanted to come out to play. I didn’t let her. 🙂

(My camera glitched when I tried to get a picture of Tim and Casey, so that one didn’t take. I was pretty mad. It would have been cool. Instead I got several others and this one of Mark Martin…) 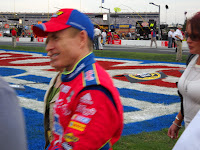 Next up… Part two of my walk in Sam’s shoes: What happens when it’s “go” time.