I reckon when it comes to losing people, I’ve been extraordinarily blessed. It’s been twelve years since I lost anyone close to me. Wednesday, July 8, that changed. Around 6:30, my uncle called to tell me my grandmother was gone. It’s news that still hasn’t become real, even though it’s nearly two weeks later. All of us always figured she’d live to be a hundred or more, still going strong. You had to know her to understand that. She was forming and installing kitchen countertops until she was pushing seventy years old. She worked at our regional theater costuming huge shows for the last twenty or so years of her life. That involved running up and down three flights of industrial stairs and climbing ladders in the costume “closet” that’s bigger than my apartment and working from dawn ’til long into the night for weeks on end. She kept up a yard that measured in at an acre–by herself. In fact, the day before she died of a heart attack–a heart attack she was having the whole time–she painted shutters and picked up pine cones and washed gutters.

My grandmother helped my dad raise my brother and me. It seems like we were at her house more than we were at our own. When I think of home, it’s her house that jumps to mind. Off the school bus at her house when we were little, summers in that huge back yard sliding on a makeshift slip and slide made from huge sheets of plastic that had once covered kitchen counters during shipment. She sewed our clothes. And could she ever sew! She made my wedding dress. At the theater, she whipped out everything from Victorian dresses to petticoats to P.T. Barnum’s ringmaster outfit to Sharpay’s over-the-top costumes for High School Musical. One of my favorite pictures of her ever is when she costumed Abe Benrubi for Of Mice and Men probably ten years ago: 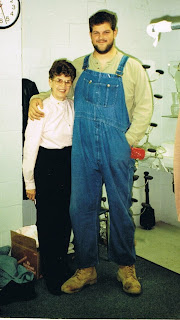 My brother and I (and probably a few dozen other people) called her Bopum. (The “p” is silent.) It’s a strange name, I know, and one I came up with when I was a baby. It stuck. And it was fitting. She was so much more than a grandmother. I spoke to her on the phone just about every day, sometimes three or four times if her cat (which was once my cat) was being particularly cute that day. She mothered me like no one else.  When I married my Army husband and we moved away to Michigan for three years, she visited eight times. The first time was less than two months after I moved away.

She made caramel cake for me every birthday. And if we were stationed out of town, she’d send one with the first person coming to visit me after my birthday, or she’d have one waiting when I stepped into her house. One of the last things we did together was make caramel cake this past Easter.

She bought me a typewriter when I was eleven. My biggest fan from the get-go, she encouraged me to write and write and write and write, even when she didn’t exactly like what I was writing. (I went through a “there’s no such thing as a happy ending” phase that she wasn’t too happy about.)

She hated it when I wore baseball caps. H-A-T-E-D I-T. I think she’d have sooner seen me bald than in a baseball cap. 🙂

She went to Egypt, Spain, Scotland, England (twice), and road-tripped across the country in her seventies.

She bought probably 75% of the clothes I own. Good sales were among her favorite things, and she’d always call me to tell me about the $150 shirt she bought for $2.99 at Belk’s. Oh, and she had more shoes than Imelda Marcos, I think. I heard about every single sale at John Allen shoes back home. Oh, and funky socks. Don’t get me started on the funky socks.

She loved hummingbirds. In fact, when she first got email, her address was hummingbird inspired.

And my Bopum could tell a story. “Did I tell you about the snake I saw in the yard? Well, I went out to change the filter in the pump house, because that has to be done every three months. The last time I changed it was the day that big storm blew up and knocked the tree over onto the Jones’s garage. That was a horrible storm. We all thought they’d have to tear the garage down, but they didn’t. They got by with re-roofing it. Anyway, the pump filter had to be changed and I had to run to town to get a new one, because I forgot I put the last one in last month. Have you seen what color the Smiths painted their house? I had to pass it on the way to town and it looks horrible. I hope that’s just the base coat…” And twenty minutes later, you’d get to how she killed the snake with the hoe in the back yard. I’m gonna miss those stories. Of course, my husband says I tell them the same way, so…

I talked to her on the phone about six hours before she died. It was a short conversation, because she told me she had food poisoning. She knew the truth, that it was a heart attack. Only two things really scared my grandmother (although she worried about a million others, I think): Alzheimer’s and being an invalid. We found out she knew all along about the heart attack and didn’t tell any of us. She was pushed into going to the doctor for her stomach and died in that office. The doctor stepped out for about thirty seconds to grab her chart off of the wall and my Bopum was gone when she came back in. She’d have chosen that. Quick. And she loved her doctor, so she was certainly not alone.

I could write books about her (And who knows? Someday, I might.) but I’ll stop here. She’d have fussed at me for saying this much already.

Today would have been her 81st birthday, but she never got old. 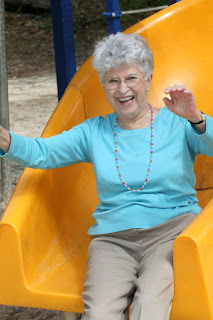